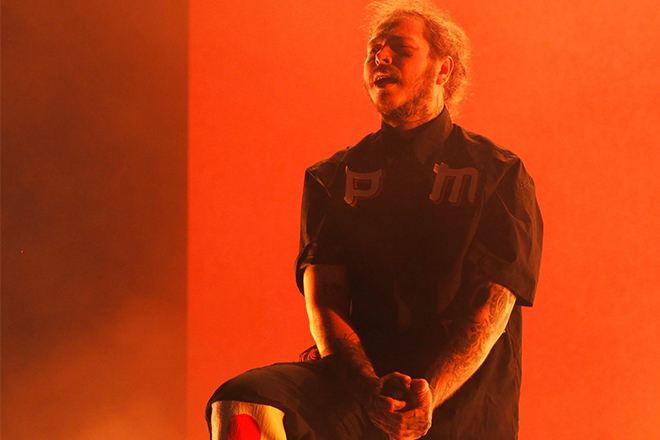 The first and only time Post Malone was in Japan, he played at the White Stage at Fuji Rock Festival in 2018. On February 15, Summer Sonic, Japan’s other big festival, announced him as a headliner for their festival, which returns after a three-year layoff on August 20 and 21. Megan Thee Stallion and CL are also the other big Hip Hop acts on the first announcement of 25 artists.

In 2018, Post Malone played on the White Stage at Fuji Rock on the Friday night, which was officially the first night even though the concert lets people in on Thursday for ‘surprise’ shows. His set was 15 minutes after N.E.R.D [featuring Pharrell Williams] on the main Green Stage. Getting to the White Stage from the Green Stage was going to be hectic because the layout at Fuji Rock is an out-of-season ski lodge that is about five kilometers from end to end, and the Green Stage lawn holds 50,000 people.

As soon as Post came out, the White Stage area exploded. He rapped and the kids ate it up. He sang and strummed his guitar and everyone ate it up. He made friendly, stoner banter, and seemed like the person having the most fun. And when some rascal from the audience threw a shoe and hit Post Malone in the head, instead of having a tizzy fit that most Hip Hop acts would, he laughed it off. Then, he grabbed the shoe, poured a beer in it, and drank it. He said, “In Australia, they call this a shoey,” and then threw that damn shoe back out into the audience, to the raucous cheers of 20,000 concert goers. If you didn’t leave the White Stage with a smile on your face after that, well, maybe you shouldn’t be at Fuji Rock. The performance was so impressive and genuine that it earned him a headliner slot just four years later at Fuji’s rival festival. That’s how things go in the Hip Hop world.

It’s great to see that these big festivals are coming back to life after a few years off due to the pandemic. For more information about Summer Sonic Festival, check the Facebook or Instagram here.

Check out Post Malone performing ‘Congratulations’ at Fuji Rock below.