The LiFTED 5 with DinPei

DinPei began his musical journey dutifully studying classical Chinese music in high school and university. He got the chance to spend a year in San Francisco at a music school, and when he came back, he entered and won Taiwan’s Red Bull 3Style event. Production had always been on his mind, so he thought about combining Hip Hop and Electronic with classic Chinese music.

This Friday, May 6, DinPei gets to show Taiwan and the world what he’s come up with at the Kaohsiung Center for the Arts as he’ll be in front of an audience and leading the Kaohsiung Chinese Orchestra with a pair of turntables scratching and cutting to his own compositions as well as others.

LiFTED caught up with DinPei between practices to learn about how he will be “doing things that no one has ever experienced before.” How did you get into deejaying in the first place? What made you want to produce music? What was it about Red Bull 3Style that made you think you could win?

I think every story has a beginning. At the very start, I just played songs to my friends at parties. One day, I went to Lava [a nightclub in Taipei a few years ago], and I was really drunk at the time. I was sitting in the booth watching the DJ and I told myself that one day I would be on that stage and play songs for everyone to listen to. After a period of hard work, I made it on the stage of Lava, and then to Luxy later, and to Omni now.

After DJing for a while, I started thinking that it would be great if I could play the music I made. It took a while, but I had the opportunity to go to San Francisco to study music production for a year. After coming back to Taiwan in 2016 full of musical nutrients, I signed up for the Red Bull 3Style DJ battle in Taiwan. In the beginning, I didn't even think that I would be able to win, I just wanted to be honest with my DJ set and try to be the best I can. I thought that if I can perform well and enjoy being on the stage, that’s all that matters. After winning Red Bull 3Style, you started doing a lot of music production. How is that going? How has 3Style influenced your production?

After winning the Taiwan Red Bull 3Style in 2016, I spent a lot of time on music production, and slowly put some songs on SoundCloud. I don't think it's just the RB3style that influenced me too much for music production. Instead, I think I was influenced more by the music I've learned in the past, and how I live my life to feel the excitement of every day, whether it's good or bad, and to digest all the feelings that are in my body and mind. What can people expect if they come to your show on Friday, May 6 at the Kaohsiung Center for the Arts?

I think the May 6 performance at Kaohsiung Center for the Arts is an experience that no one has ever experienced before. I recomposed two of my original songs, ‘Shuriken’ and ‘Alterac Valley,’ and taught them to a Chinese orchestra. These songs were included on my first album ___ w/ me, but these versions are definitely not what people will expect.

I also chose a piece of Chinese music from a composer that I admire very much [蘇文慶] and remixed it - ‘山海印象.’ I believe that friends who listen to Chinese music must be familiar with this song, but although they may have heard ‘山海印象,’ this version is something they haven't heard before. You have mentioned that this is a dream come true to mix electronic and orchestral music. Why? What makes this a good combination?

I studied Chinese music from high school to university. At that time, I hated reading musical scores, especially every time I had to take an exam.

When I went to a nightclub in college, that was the first time I saw a DJ who could do what he wanted on the fly. The DJ could play any song, switch any part of the music, and was not bound by the score like in classical music. So I started to think, what if I combine deejaying electronic music and Chinese music? What will that evolve into? What would it look like? I’m sure the preparation for this is crazy. What have you been doing to get ready each day for the show?

In April, I had come to Kaohsiung to rehearse with Kaohsuing Community Orchestra [高雄市國樂團] for the first time, and during the period from April to May, I was locked in the studio arranging the notes on the sheet music. This also includes which samples and elements I want to use to scratch, etc.

Before the May 6 performance, I rehearsed with the excellent players of the Chinese Orchestra every day. I really wanted to go out for a drink after the rehearsal, but now because of the COVID-19 situation in Taiwan, I can only obediently go back to the hotel after the rehearsal, watch Netflix, and then drink alone. 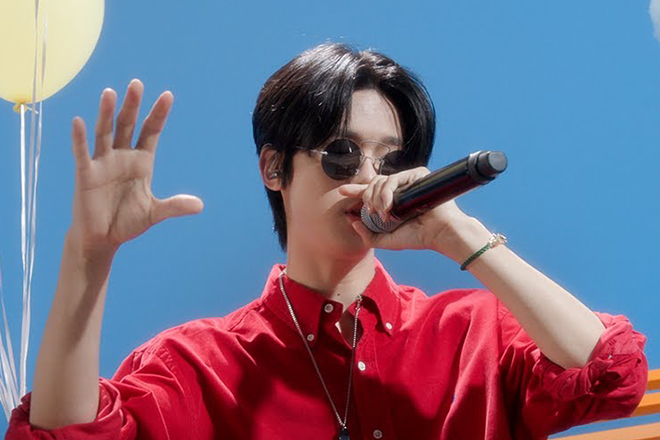 The aim is to shift value back to creators