In recent years, drag communities have been embraced with open arms by younger generations. The struggle for acceptance has been a long and tiring one as drag queens and kings go as far back to ancient Native American and indigenous South American cultures, Egyptian ceremonies, and Japanese theater.

While dressing in drag has been around as long as clothing, RuPaul’s Drag Race changed people’s perception of drag queens in 2009. Last year, Midnight in Asia was released on Netflix, and its Taipei episode featured an in-depth look at a drag king’s first performance. Now SILVY, a Thai-Italian MC, shows her fluidity by dressing as her favorite rappers in ‘GANG$TA.’

In the first seconds of the video, SILVY rolls up in a low-rider and is what could be called Snoop-lite. She’s got a blunt, a goatee, and two twists in her hair, but it wasn’t until she’s flexing with a dog that the Snoop comparison makes sense. The neighbor sticks his rainbow-colored dreads over the fence while drinking some drank from a plastic bag and soon, we realize that SILVY with her tin-foil-coated teeth, looks a lot like Lil Pump. Soon, she’s 50 Cent pumping iron in the front yard and Eminem expeditiously writing rhymes, and we realize that SILVY got influenced by the Super Bowl, didn’t she?

Finally, she pops out of the back of her car tossing cash around with a see-through mask and all red plastic jacket and pants. SILVY has morphed into Kanye as her final drag king of the day. In a twist, SILVY actually shows up and starts twerking like there is no tomorrow. The car hits switches and bounces up and down as SILVY does her thing. Eventually, her mom pops out with an oversized bottle of milk and that’s the end of SILVY’s drag king dreams.

Check out SILVY’s ‘GANG$TA’ below. Megan Thee Stallion turns into a superstar on SNL

She’s a triple threat as a host, performer & actress 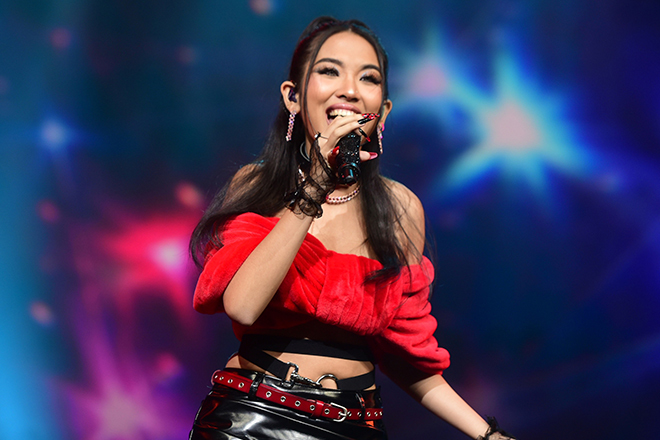