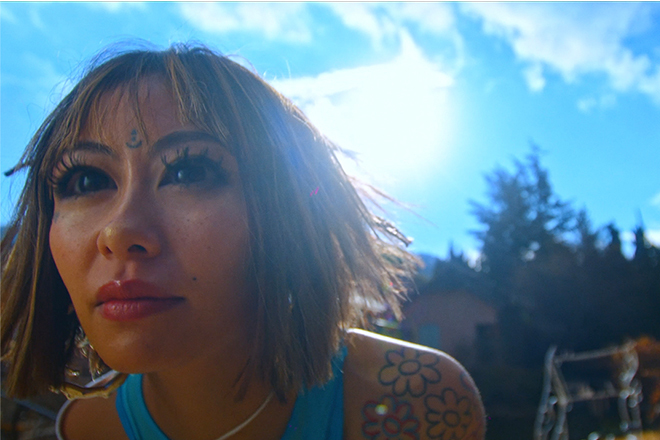 When we last saw NENE and Ryugo of Yurufuwa Gang in LiFTED, they were doing some spray painting and disturbing the peace in ‘Ying Yang.’ Now the Gang is back and they’ve gone down a rabbit hole in ‘Alissa,’ their latest that is a modern take on Alice’s Adventures in Wonderland, an 1865 novel by Lewis Carrol. Of course, that novel has had sequels [Through the Looking Glass], been made into stage adaptations, TV shows, musicals, animated films, and blockbuster Hollywood features over the years.

Yurufuwa Gang’s telling of ‘Alissa’ has an interesting cast of characters - Ryugo dressed up as a purple disco rabbit; NENE as swagged out Alice lost in a forest; some elderly bald men that look enough alike to symbolize Tweedledee and Tweedledum; a youthful rabbit with a Flavor Flav clock; and a portly princess with a pink wig and hat.

The setting is a suburban wasteland that could be just about anywhere. Ryugo starts off on the Rock-tinged beat with his face melting from one bar to the next. NENE is second as she’s chasing the youthful rabbit around suburbia and rapping through the rose garden. Soon all the characters are running around outside and the beat switches. NENE is back in the forest, but this time instead of an upbeat Rock beat, a slowed-down Trap burner is being rapped over. Eventually, Yurufuwa Gang [spoiler alert] wakes up next to a tree and leaves.

‘Alissa’ is a compelling song and video, and it definitely keeps Yurufuwa Gang’s coolness on display.

Check out Yurufuwa Gang’s ‘Alissa’ below.