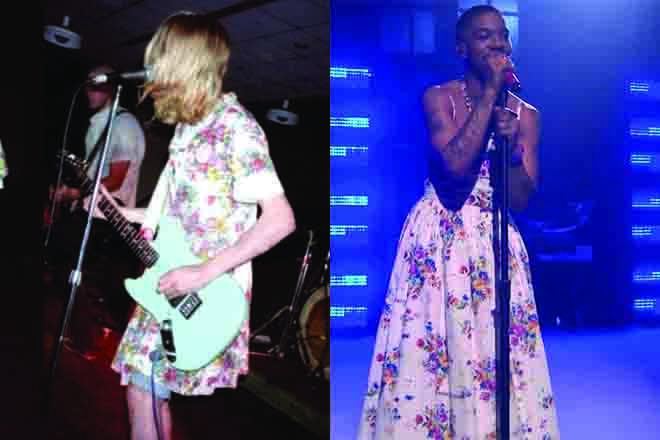 While the conservative internet still has their rhinestone-studded panties in a bunch because Lil Nas X lap danced on Satan in his latest video ‘Montero’ all the way to Billboard’s number one spot, another genre-blurring performance has people up in arms. Kid Cudi, in tribute to Nirvana’s Kurt Cobain very close to his 27th death anniversary, wore a flowery dress like Kurt used to when he sang ‘Sad People’ on Saturday Night Live.

The dress wasn’t the only tribute. For his first song, ‘Tequila Shots,’ Cudi wore an army green cardigan sweater that Kurt favored and wore on their unplugged album. Underneath the opened sweater was a picture of deceased Saturday Night Live alum Chris Farley.

As usual, the dress caught all of the attention. Cudi even did a curtsy at the end of his performance, and when everyone came out to say goodbye at the end of Saturday Night Live, Cudi flexed hard in the dress. Afterward, apparently enjoying the notoriety, Cudi tweeted out that Virgil Abloh’s Off-White brand had made the white floral maxi dress with spaghetti straps and it would be available in a collection soon.

Virgil designed the dress for me. I told him I wanted to show love to Kurt w a floral print sundress and this man made a masterpiece. Thank You @virgilabloh ur a fuckin genius!! Love you man we did it!!!

The dress attracted its fair share of haters. “Nah, that ain’t it” read one tweet, “publicity stunt gone wrong” read another, while “They trying to normalize that sh*t” was also posted on Cudi’s Twitter timeline.

For many years, Cudi has talked about the depression that he shared with Kurt Cobain and his homage has been praised by many for shining a light on the subject. With the dress and cardigan, Cudi is getting the media to talk about mental health issues in an unambiguous way.

Kid Cudi is such a legend for this man pic.twitter.com/uj8f4SmJAb